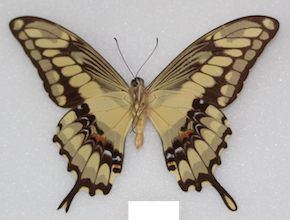 Identification: The wings are dark brown with a 'k'-shaped yellow band on the outer postdiscal and subapical regions of the forewings, and a yellow postbasal band on the hindwings. The hindwings also have yellow outer postdiscal lunules along the scalloped termen and a yellow-centred tail at the tornus. There is also a blue-crowned yellow marking above the tornus. The submarginal lunules appear much larger on the underside and there is an additional row of blue lunules on the inner side, as well as one yellow and two yellow-crowned red lunules on the inner side of the blue lunules. The hindwings are yellow from the inner side of the lunules all the way to the base. The forewings have yellow submarginal markings on the underside, as well as yellow stripes radiating from the base of the forewings to the inner side of the broad yellow band. The body is dark brown at the head and thorax and yellow at the abdomen on the upperside, and completely yellow on the underside.