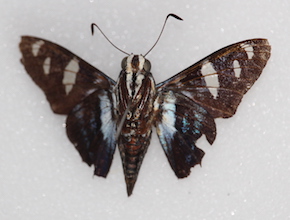 Identification: The wings are black with black fringe, except on the hindwings where the fringe is white in between veins. The forewings have a subapical white band, a central white band, and a white and iridescent blue band in between the subapical and central bands. There are two iridescent blue bands between the central band and base on the upperside of the forewings; the one closest to the base appears white on the underside. The hindwings have two iridescent blue bands and an additional white band near the base on the underside. The dorsum is white on the upperside of the hindwings. The body is dark brown with vertical bluish-white lines on the head, thorax and upper part of the abdomen, and two transverse bluish-white lines on the mid-abdomen.